What is the difference between TDD vs BDD? 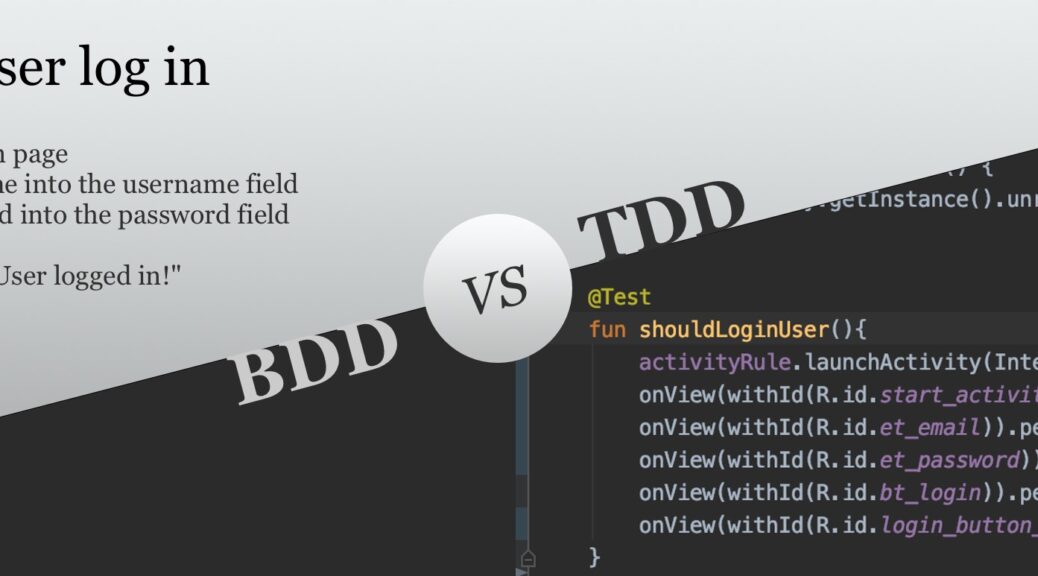 TDD and BDD are two types of software development practices. TDD stands for test-driven development, while BDD is a short form of behavioral-driven development. The names of both sound similar, but of course, they are not! Please do not get them confused.

Before discussing the differences between these two in detail, let’s first explore what TDD and BDD are precise.

The team that implements TDD requires more time to develop the software, but it can improve the software quality significantly.

Also, the code is more flexible and can be more easily reused. Besides that, TDD supports achieving high coverage of tests, about 90 to 100 percent.

Developers who follow TDD often claim that the most challenging task is to write their test cases before writing the code.

Suppose you have to develop a login functionality for some application with a username and password option and a submit button.

If this method to run the test case is applied, it will fail. Repeat all the initial five steps for this test case and then add the functionality for handling empty Username and Password.

Have a look at TDD framework representation.

Here we have listed the benefits of Test-Driven Development for your better understanding.

When you write a new code, you usually have a list of required features and acceptance criteria needed to be met. Any of these can be used for what you are required to test, and then when you’ve got that list, you can be relaxed if it confirms that you haven’t missed anything.

If you write a failing test, then you’ll focus only on that to clear that test. It enhances you to consider smaller stuff related to functionality for the time being. Instead of handling the bigger picture, it may result in more errors and a long time for development.

Just because you are writing a test for single functionality, writing a test means that you need to pay attention to the public interface that another code in the application requires to integrate. You do not consider the private methods or internals that you are about to start working on.

From the test perspective, you’re writing methods to test the public ways. It means that the code will make more sense.

Your test can only interface with the public methods of your codebase, which means that you have a better idea of what can be made private. It means you do not expose the methods accidentally, which are not required to be public. If you accidentally made parts of your APIpublic, you may probably have to support that in the future.

Once you have passed a test, it’s now safe to reorganize your codebase. Keep in mind that the test cases have your back. If you are required to work with legacy code or the code that somebody else has written, with no tests been written, TDD can still be practiced.

TDD often results in more tests, which may result in longer times for test runs. On the other hand, you can save a lot of time with better code coverage: Errors are found and fixed a lot quicker this way.

Not to mention that you may be able to think of every test case, but if a bug shows up, you can continue with the test before you attempt to rectify the error.

Also Read: Repeato’s mission: Why I Chose to Write my Own UI testing tool

BDD means behavioral-driven development. It is an extension to TDD, where you start by describing behavior instead of writing test cases. We develop the codebase afterward, which allows our application to perform the expected and described behavior.

The scenario explained in the BDD approach makes it convenient for the testers, developers, and business users to collaborate. BDD is considered a great practice when we talk about automated testing. It mainly focuses on the application’s behavior and abstracts from code implementation.

The application’s behavior is the center of focus in BDD. It forces the testers and developers to put themselves into the shoes of the user.

The process followed for BDD methodology is also a six-step procedure similar to the TDD cycle.

Also Read: How to choose the Best UI Testing tool

Suppose that, for an application, you are required to develop a software functionality that has fields to fill in the Username, Password, and a submit button.

Suppose the language of communication is easy to understand for everyone participating. In that case, people experience strong visibility into the progress of the project.

BDD puts a great value on the business needs and requirements. When setting priorities with your client, depending on the values they provide, developers can deliver a better result when they have a better understanding of how a client thinks.

Ubiquitous language is that language that every member can understand easily. It reduces the possibility of misunderstandings and misconceptions and makes it convenient for those who join the group later.

When you focus on business needs, you will have satisfied users, which implies a flourishing business. With BDD, you tend to focus on the behavior better, which leaves a strong effect than implementation itself.

People who use BDD are generally more confident as there is no chance to break the code. When it comes to their work, they have better predictability.

When you improve the code’s quality, you reduce the maintenance cost and minimize the project’s risk factor.

Most people get confused for not having a better idea about the difference between TDD and BDD. TDD requires you to use code as a language to describe your test cases. In comparison to that, BDD is a language that allows users to understand and use it easily as it is like general language.

TDD and BDD have little bit similarities with so many differences. Let’s explore the details about both the practices TDD vs. BDD below.

Selecting between TDD and BDD seems to be tricky. Some may believe that TDD is better as it supports efficient test creation for developers without going through the hassle to implement another level of abstraction BDD. On the other hand, some say that BDD is the right choice of strategy, cause it brings all the stakeholders on the same page.

No approach is better than the other; it depends on the developer which methodology is convenient for him personally, like the TDD method or the BDD method.

Tags: bdd, difference between tdd and bdd, tdd, tdd vs bdd, test-driven development, what is bdd, what is tdd